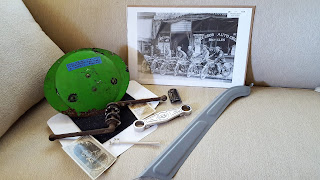 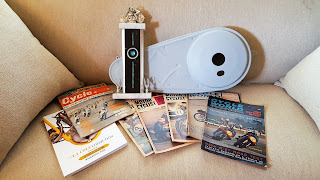 Some of the stuff found at Davenport and a antique mall on the way home.  Top picture shows a factory number plate/wind screen that will look killer on my 1960 Ducati.  A Wagner photo from the antique mall.  The large picture is a reproduction also from the mall.  A motorbike crank set and Colson bicycle badge.  The small picture is a JDH picture that was waiting for me when I got home.  I won that on eBay.  For the Harley project I got the carburetor control connection, chain guard and fork tube stabilizer.  In the bottom picture are a trophy I bought for the topper, Harley primary cover and a pile of magazines from the mid 60s to 1970.  I also picked up a catalog from the E. J. Cole collection auction.  My big score was a Miami built bicycle!  The same company responsible for Flying Merkel motorcycles.  I owned it for about 10 minutes before Mr. John Parham bought it from me!  Hopefully it will end up in the National Motorcycle Museum when he is done restoring it.  Pictures of that to follow.
Posted by Boardtrackfan at 12:02 PM