The saga of my 1927 Harley Davidson J engine.

As many have seen over the past few years I am trying to build a 1927 Harley Davidson model J motorcycle.  What started as a rusty frame is now a beautifully painted roller.

After reading about Matt Olsen in American Iron magazine and seeing Brittney's bike run at Wauseon, l was convinced I wanted Matt to build my engine.  I contacted him prior to the 2013 Davenport event.

Matt agreed to build my engine.  I gave him the engine and $2000.00 cash.  The engine was dissembled (see pictures in earlier blog entries), cleaned and included many new parts from Competition Distributing. Some of the parts were even duplicates with a original part as well as the new version.  The idea being to use what ever worked/fit the best.

Matt promised as soon as he got home he would send an invoice.  He also promised the engine would be done that winter.  As the winter came to an end, I contacted Matt about the engine.  He was working on the cylinders' broken fins, we discussed finishes for the cylinders, crank cases, etc.  Still no invoice.

At this point, he also said he would send photos of the progress.  As summer rolled in, I kept in contact trying to get updates.  He talked me into buying Truett and Osborn flywheels for it, eventually telling me "the bottom end is almost done."  The cylinders were also repaired and painted.

I was told it would not be done in time for delivery at Davenport.  We met up at Davenport and had a nice chat and everything was fine.  That fall I talked to Matt and was informed that the valve seats were cracked on both cylinders.  The fronts were repairable but the backs were beyond his expertise.  He was sending them out to be repaired.  I think this was the last time I spoke to Matt.

From that point on, I could only get Carl, Matt's dad on the phone. It was determined that the rear cylinder was beyond repair.  A new cylinder must be found.  After several months of fruitless searching, I discovered JD Jugs on the internet.  My first thought was to buy only a rear but Carl talked me into getting a pair.

I contacted Stuart and ordered my cylinders.  I had them delivered directly to Carl's Cycle Supply.  In the spring of this year, I called Carl (still unable to contact Matt).

I was told that two fronts had been sent and one had been damaged in shipping.  Crap!  To top it off they kept the one with broken fins and sent back the good one.  WTF!  I just paid $3400.00 for a broken cylinder. Carl assured me they would fix it.  Whatever...

Matt was a no show at Wauseon and was still obviously avoiding me.  I sent messages through Facebook, and tried calling repeatedly.  Keep in mind we are coming up on two years now, and I still have not gotten an invoice or even a picture emailed to me.  After Wauseon, I talked with Carl yet again.  He told me the engine would be done this winter.

At this point I decided the Olsen's were done "working" on my engine.  I tried contacting the Olsen clan multiple times before Davenport so they could bring it with them and avoid shipping.  No dice..  I talked to Carl face to face in Davnport and asked for the engine back.

He said no problem and he would return my money.  "No hard feelings" and we shook hands.  Carl told me he would be away the week after Davenport, but would send the parts when he got back.  I expected it to show up mid to late September.  On Oct 17th I sent this letter.

Unfortunately, it has come to this.  I asked Carl for the return of my parts and money back on Sept 3rd, 2015 in Davenport.  It has now been 6 weeks.  I will be seeking legal action against you if I do not receive the remainder of my parts and money by Oct 30th, 2015.  At that point I will also let your names be known to the people that have inquired about my project.  Until now I have kept your names out of the antique motorcycle forums, blogs, Facebook and, Instagram.  I do not wish to damage your business but this has gone on way too long.  By keeping this quiet I am only enabling Matt to do this to some other poor soul.  This can all go away and be a bad memory if you would just send my parts and money back!   You asked me what was missing from the first shipment.

When I gave the engine and money to Matt most parts were bagged, labeled and the entire thing placed in plastic bins.  How did these things get misplaced?


To my surprise on the 19th boxes arrived on my door step!  They had been mailed on the 15th.  Prior to my letter.  After going through all the boxes several times I came up with a list of a couple  missing pieces.  I sent this letter next.


I received the boxes you sent on the 15th.  Thank you.  It is a huge relief to have the vital pieces of the engine back.  I am still missing parts of the oiler, the body specifically.  Also missing is the gasket kit, and I still want the original cylinders back.  In regards to the money,  I see that Matt has done some work on the cases, cleaned a few things, and added helicoils to the timing chest. I have no problem paying for his work and the new fly wheels.  I do have a problem paying for all this shipping.  The original deal was that Matt would have the engine done that winter, and I would pick it up.  After that time line expired, he said I could pick it up at Wauseon or Davenport.  That didn't happen either.  This has gone 22 months past when he promised the engine would be done!  This year I tried  to contact you for several days leading up to Davenport, so you could bring it with you and save time and shipping.  In short, Matt really dropped the ball and now you are saying I am responsible for return shipping.  That does not seem right.


Dave,]
You have a lot of nerve trying to stick me with the shipping, I should have charged you for all the time involved with packaging up the parts so they did not get damaged when I shipped them back.  I am sure if there was damage or loss, you would have been upset, after all you wanted it shipped.  You could have come and picked it up if you wanted to save money and time on the shipping.  Prior to Davenport I went on the road run in Wisconsin and spent a few days in Milwaukee, I was at the place where your cylinders are and we will have them direct shipped to you.  We filled your list and sent you the parts, but the list never ends according to you.  You pulled the job, not me, SO MAN UP AND MOVE ON,  I have.
Carl


At this point I am wondering if I will ever see the original cylinders, my money or the missing parts.  A couple weeks go by and I get a check and an invoice.  Also the original cylinders show up.  They have been shipped from Michael Lange's shop.  I'm really pissed about the whole ordeal.  After waiting 26 months and spending $1457.96 I got back boxes of parts, some really nice looking broken cylinders and new flywheels.


Why didn't they check the valve seats before doing all the cosmetic work on the cylinders?  Why did they send back the good cylinder and keep the broken one?  Why am I dealing with Carl and not Matt?  Why did it take so long?!  Will I ever get my oiler and gasket kit back?  I did contact Stuart at JD Jugs and he is giving me my money back for the return shipping charges.  Stuart and Tom Faber who has the engine now have been the only bright lights on this project.


My final letter to Carl and Matt.

Put yourself in my shoes.  After over 2 years of waiting I have a bunch of boxes of parts, a bill for shipping and now I have to replace parts that Matt misplaced.  Does that seem fair?  I still don't understand why Matt has been absolved of any responsibility here.  My deal was with him, not you.  If anyone needs to "MAN UP" it is Matt.  You seem like a nice guy and you have a good reputation.  It is too bad that Matt put you/us in this situation.


I have told my story to a few AMCA members.  Now I'm told Carl can be difficult to deal with!  Matt and Carl are knowledgeable and seem pretty nice most of the time.  I just don't recommend doing business with them. 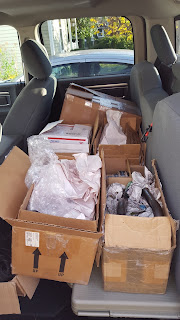 This is what I got back after 26 months.
Posted by Boardtrackfan at 9:57 AM